During the first quarter Hexicon successfully managed to grow its project portfolio, expand its geographical presence, and advance the company and its offering. Hexicon continues to preserve its early-mover position in key markets as the global floating wind industry matures towards commercialisation.

COMMENT FROM MARCUS THOR, CEO
“As energy prices are surging, the consensus around the importance of scalable renewable energy sources like floating wind and secure energy infrastructure continues to grow. This trend provides an excellent opportunity for Hexicon, that has managed to further strengthen its position during the first quarter of 2022.

Several important milestones were reached during the first quarter. In South Korea, we secured two additional Electricity Business Licenses (EBL) for the floating offshore wind project Munmu Baram. We also secured the water rights to an additional 450 MW in the Pohang region on the east coast. In Sweden, our 50/50 JV Freja Offshore with Aker Offshore Wind progressed into the environmental impact assessment stage following a successful consultation.

The technology roadmap has been further advanced. In January, we were awarded a marine license for the installation of two TwinWind foundations in the Celtic Sea, within our TwinHub project. After being pre-qualified for the Contracts for Difference auction scheme, we are now preparing for our participation in one of the upcoming allocation rounds. Being pre-qualified provides evidence of our ability as a project developer and as we move into the bidding stage within the Contracts for Difference, the competitiveness of our technology will be put to the test. In Norway, the site-specific engineering continues full speed ahead for the TwinWay Demonstrator Project with our fabrication partner Worley. The two Vestas 3 MW turbines previously purchased are now planned to be transported to Norway this summer.

We continue to expand our geographical presence. In North America, a substantial and strategically important market, we continue to strengthen our position. During the first quarter, new key recruitments were made, bringing us extensive industry experience and local know- how. We are now better equipped to compete in Marcus Thor CEO North America, as a technology provider as well as a project developer. President Biden’s push for a clean energy economy is adding both pace to the renewables transition and size to the market. The development is now underway, faster than we initially projected.

In Greece, we created a new JV after the end of the quarter (April). Together with the local company EAMAA, we formed JV Hexicon Power SA. Greece and Italy, the latter being operated through our JV AvenHexicon, are strategically important markets being main recipients of the EU Green Deal and having suitable environments for floating wind. The early positioning in these South European markets, ahead of legal frameworks for offshore wind which is expected within short, is in line with our strategy as an early-stage developer.

We are well-positioned for our next step. As the demand for floating wind continues to grow, so is its rise on the political agenda. Nations continue to turn their attention to this emerging industry, adapting legislation and undertaking new initiatives. Given this development and our significant progress during the last three months, I feel that we are taking considerable steps in our company journey. Step by step, we continue to move Hexicon in the right direction.”

PRESENTATION
Marcus Thor will provide an update of the operations in connection with his speech at the 2022 AGM on 12 May. The speech will be published at Hexicon’s website following the end of the AGM.

LINK TO THE REPORT
The interim report is attached to this announcement and available at https://www.hexicon.eu/investors/report-center/

Hexicon is a Swedish cleantech company that develops wind power projects in deep waters internationally. The company has its own patented technology; TwinWind, which consists of a floating foundation with two turbines. The innovative twin turbine design enables more turbines per sea area, which increases the energy yield and reduces the environmental impact. Sustainability, innovation, and cooperation are at the core of Hexicon's business and floating wind power is a key component as the world transitions to renewables. Hexicon is listed on Nasdaq First North Premier Growth Market (ticker HEXI). Certified Adviser is FNCA Sweden AB, info@fnca.se, +46 (0) 8528 00 399.

This information is information that Hexicon AB is obliged to make public pursuant to the EU Market Abuse Regulation. The information was submitted for publication, through the agency of the contact persons set out above, at 2022-05-11 08:00 CEST. 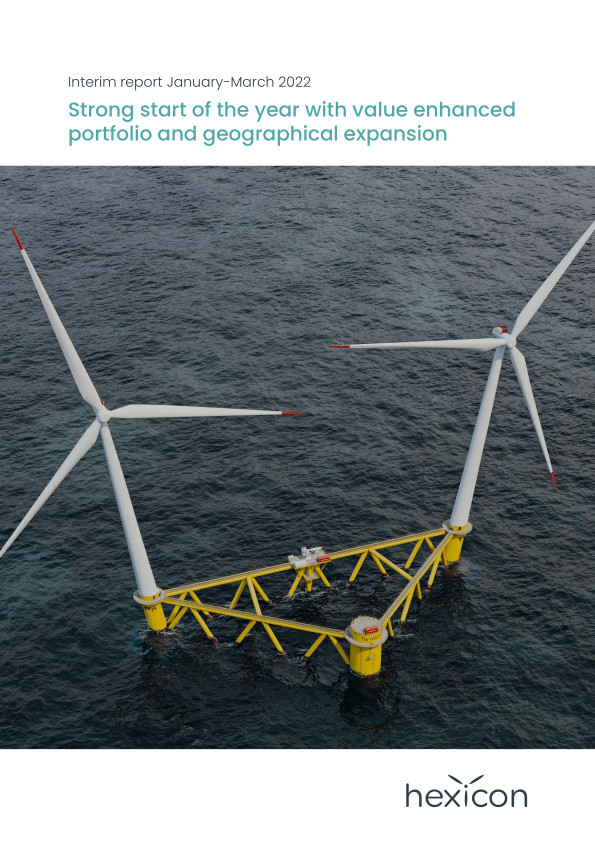